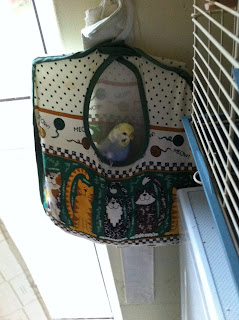 I know munchkin can’t read this but I think she deserves a public apology!

Now one of my budgies seems to be extra intelligent. Recently he has been found out of the cage with all the doors shut. This week it happened when munchkin was by the cage. So I made the assumption she was opening the door and letting him out. I quizzed her about it and didn’t believe her when she said she didn’t do it. It seemed impossible that he could get out on his own! Mission impossible in fact!! She realised I wasn’t believing her so she got a bit upset.

Now on Friday I came home early from work and he was out. So I assumed that she had let him out in the morning.  I put him back in the cage when I went to pick munchkin from school. I came back and got to the cage before her and he was out. So it wasn’t her who was letting him out. While I was telling him off he squeezed himself through the bars, sat on his perch and looked at me innocently.

To my darling munckin,
I am soooo sorry I did not believe you when you said you were not letting out the budgie. But it did seem impossible that he could squeeze himself through the bars. However I should have realised he is one smart cookie seeing as he does things none of my other budgies have done. He hangs upside down from the top of the cage, he gets in my peg bag and throws all the clothes pegs on the floor and looks at them, but as soon as I go in the kitchen he stops doing it, he manages to sit on the curtain poles, on the lights etc etc. So I should have realised he was no ordinary budgie.
I promise in future I will believe you and not automatically assume you are lying to me because you think you may get into trouble.
Love Mum! xxx