Skip to content
Asalaam Alaikum/Hi All!
I have been asked to say more about my trip as I have only briefly mentioned a few things here, here and here.
Well, in all honesty, there is not a huge amount to tell.
On day four of the trip my stomach went. I was being extra careful about what I ate and to be honest wasn’t eating a whole lot. I ended up going to someone’s house in the evening and they insisted I eat a chicken roll they had made. I do not know what it is with people but they literally force food down you even when you keep saying that it will make us ill. I had it and all evening felt uncomfortable. In the morning I woke up and could just taste it and felt like I was going to be sick.
Hubby has this odd idea that getting some sprite, adding some salt and quickly drinking it will help.
It certainly did help but not in the way he was expecting! I was immediately sick. Soon after the upset stomach started and to be honest I pretty much had to live with it the whole time I was there. It has never been this bad before and I practically lived on Imodium tablets! I resorted to pretty much only having one meal a day (was skipping breakfast too) but I had plenty of ice cream! This one was my favourite! 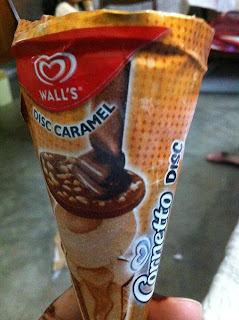 My stomach has only just (almost) gone back to normal.
The first four days hubby was pretty much missing all the time as he was catching up with family and his friends, so I kind of got bored and munchkin got sick of having to say hello to all the visitors. She made me laugh when for about the 10th time that day I told her to get out of the bedroom and come say hello to ‘Aunty’. She looked at me with a very indignant look on her face and said ‘Why are all these Aunties coming!?’ Well we were disturbing her cartoons!
We went to the local market to start shopping but I always get frustrated. I hate that motorbikes are driven in the narrow allies and haggling does my head in. Then you have all the beggars asking for money. I made hubby give some money to an old lady and then I think they must have realised I was a soft touch because I pretty much got hassled at every turn.
We didn’t really go anywhere as I was a bit worried about the dengue fever. However hubby took us to a riverside hotel one evening which has lovely food and had fairground rides for munchkin.
Munchkin cottoned on to the fact that everyone was on her side and she could pretty much get away with anything. She then tested me to the limit by starting to misbehave and not listen to me. She did enjoy it there, she was always running to the shop (we have a shop out front) and helping out, she was off out on the motorbike with her dad, she saw goats, cows, etc and some cute puppies that were living on the street.
Eid wasn’t particularly special either, although there was a festive atmosphere. It was the first Eid ever without my parents and it was strange. So I went to visit my brothers grave just to be close to family. It was a quiet Eid. Our shop remains open on Eid day as that is when they make the most sales so my father in law, hubby and cousin were busy all day in the shop!
It was nice not to have to cook and clean for 3 weeks. In the 3 weeks I was there I only cooked about 3 times so it was a lovely rest. However, I was so glad when it was time to come home. Having said that though, I felt extremely sad for my in laws. We had brought some life to the house for 3 weeks. Now it’s back to silence.