Skip to content
For the past few months munchkin has been doing my head in about snow. While I have been secretly hoping that it doesn’t snow, she has been waiting excitedly to see some so that she can make a snowman.
She got her wish when it started snowing Saturday evening. Before she went to bed she looked out the window and was disappointed to see that the snow wasn’t enough to build a snowman.
She woke up early on Sunday morning (7am – sigh) and the first thing she did was rush downstairs to check to see how much snow there was. While I was silently groaning and failing in my attempts to be invisible under my duvet, I had an overexcited 5 year old who wanted to immediately go out and build a snowman.
I reluctantly got out of bed and looked out the window: 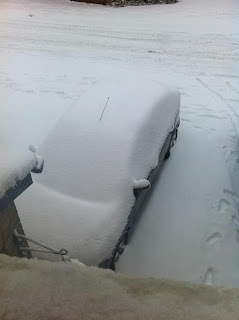 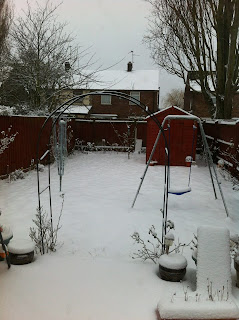 So after breakfast out we went and my hubby reluctantly also joined in. He had just come home from a night shift.
Now my attempts at snowmen are usually pathetic – I never made snowmen as a child. My hubby is not much better. He gave up and instead made a leaning tower of pisa:

Here is mine and munchkins attempt:

Ok, Ok, it doesn’t look much like a snowman but my back was hurting so I gave up.
At least munchkin had fun and threw a few snowballs!