Skip to content
I had never heard of Nano Speed so when I was offered the chance to review the Nano Speed Super Vert Crash Set I couldn’t resist. Although some may see it as a ‘boys’ toy, munchkin likes cars too (she clearly takes after me!) so it was ideal for us.

So what is Nano Speed?
They are small and fast ‘extreme micro-sized vehicles powered by the NS-1500 motor! With an insane power to weight ratio, each Nano Speed is packed with enough power to defy gravity and perform insane-high speed stunts.’
Sounds great doesn’t it?
What’s in the box?
The track, motor and 2 cars.

Stickers to decorate the track with.

The track is relatively easy to build. I did scratch my head initially and get frustrated as I did not realise that the tracks were all numbered (blame pregnancy brain). As soon as I cottoned on to that fact, building it was a piece of cake! 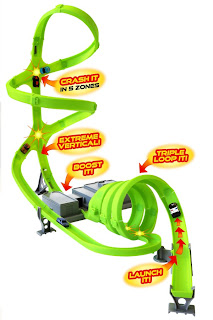 The cars come with a pull back mechanism. You pull them back until they click and then let go to launch them. Once you launch them they go round the triple loop, and are then boosted by the battery pack (note you require 2 size D batteries) to hit maximum speed; they can go as fast as 1500mph scaled speed. The boost powers them up the vertical track and down back into the boost unit.
We struggled to get the cars to go round the initial triple loop. I managed it a few times but munchkin could not do it at all. She gave up and put the cars straight through the boost battery pack. She was fascinated by how fast the cars went but it was spoiled by the cars actually falling off the track. One consistently fell off and at that speed went flying and actually hit her on the head as she was sitting on the floor next to it (luckily she found it funny – however it could have turned nasty).
Another downside to it is that the battery pack is extremely noisy and can get irritating after a while. So not ideal if you want your child to have a bit of quiet play time.
Munchkin is currently fascinated by the crash set, but I can see her getting bored of it after a while. One way of keeping a child’s interest in it is to collect the various cars available; there are 60+ Nano Speed cars to collect and various different sets.
However, my main concern is that if the cars fall off the track at that speed, even though they are small, they could do some damage.
Disclaimer: I was sent the Crash Set for review purposes by Blog-Match. However, all thoughts and opinions are my own.