Well I was at work today waiting for 3pm so I could come home. I was actually desperate to get home because due to the air conditioning at work I was beginning to feel like an ice popsicle.

I share an office with around 10 other people and they seem to like it cold. SO I just have to grin and bear it. I am finding it even colder in ramadan because while fasting I always feel colder. So basically all my clients think I am mad when I am wearing a light cardigan and they are all sweating!!!

Anyway the sky was just getting darker and darker so I just knew that the heavens were about to open. I was hoping it would wait until I got home. As I left work the thunder and lightning started and it started raining slightly. I went to pick up munchkin from my parents house and as soon as I stepped foot indoors it chucked it down. And I mean chucked it down!!!

The rain was so bad you literally couldn’t see and the sound on the roof of my parents conservatory was horrendous!!!

As soon as it stopped, about 10 minutes later, I left as needed to get home to start preparing food for iftari, (for those that don’t know what iftari is, it is when we open our fast). And this is what I found on the roads: 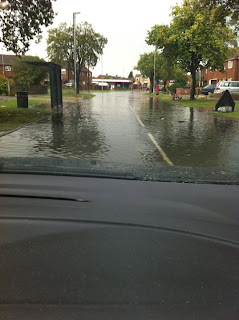 The drains obviously could not cope with the sheer volume of water! 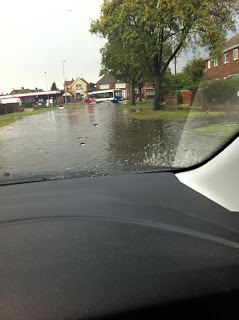 And if you think this road was bad you are wrong! It was nothing compared to another road I went on. I didn’t manage to take a picture of that as I was so worried my car was going to float away!

(I was tempted though to drive fast past a group of people outside a pub and splash them!! But they saw sense to move back!! LOL)