Hi All!
My munchkin loves anything pink and also likes princesses (well she is one herself!!)
So when I was offered the chance by Garden Games to review their Fairy Princess Tent I could hardly say no!
Garden Games description:
This beautiful pink princess tent will bring happy smiles to your little princess. The unit includes fabric windows and doors that role up with ties. The tent is a hexagonal turret shaped tent with a flag on the top. The tent slots together and is joined with connectors for easy installation.
Firstly I was impressed by the service I received. I was sent emails informing me of my order, that it had been sent and then finally that it was out for delivery. As I was having the tent delivered to my parents address I was able to warn them and ask them not to go out!
Munchkin was excited to hear that the parcel was a princess tent, but due to feeling ill and jetlegged we waited until the weekend when I was feeling slightly more human to unpack it!
So on the weekend, before we were even out of our pyjamas, munchkin was bouncing about and hassling us to set up the tent.

As soon as I opened the box I was pleasantly surprised by the quality of the wooden poles, the connectors and the canvas itself which is made of good quality cotton.
Seeing as it is November we decided to keep the tent indoors and build it up in munchkin’s room. However, we didn’t realise how big it actually is and it pretty much took up all the space in her room. BUT she loved it, especially the flag on top!
It was very easy to put together. The instructions were simple and clear, (not like usual instructions which although written in English feel like they are in a foreign language), and I managed to get it together within 10 minutes. However, I didn’t screw it all together because I realised that due to it’s size it could not stay in her room and once it is made up it is difficult to move around from one room to another. But to be honest I can’t see it taking much more than a further 10-15 minutes to screw the poles to the connectors.
Even without screwing it all together, the frame was rigid and felt relatively safe. As soon as I put it together, munchkin shot straight into it! 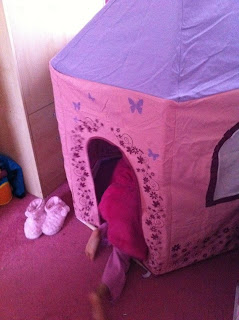 And soon after, her teddies followed:

The tent retails at just under Â£80. At first I thought it did seem pricey for a tent but after seeing the quality of it and the potential hours of fun that could be had in it, I feel that it is worth it. Munchkin simply adored it and loved the pink and lilac colours. She has other cheaper tents which tend to blow away when it gets a bit windy but there is no fear of that happening with this if it is placed outside. It is also very spacious, with space for another child and teddies!
Sadly we have had to pack it up for now because there is literally no space in the house for it to be set up. However, I am convinced she will have plenty of fun in the summer when we place it in the garden. It is the perfect little playhouse for her.
Disclaimer: I was sent the Fairy Princess Tent free of charge for the purposes of a review. However all views are my own unbiased opinion.