Skip to content
Asalaam Alaikum/Hi all!!
Currently there is a bit of an uproar in the UK about immigration control and how it is not as tight as it should be. I haven’t really been taking much notice of it but it is reminding me of my experience at the Pakistan airport which left me slightly bemused. 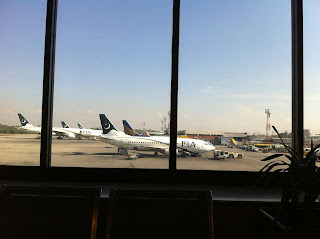 Let me explain.
You are not meant to take too many cigarettes or CD’s and DVD’s. We had 4 boxes of cigarettes and quite a few CD’s and DVD’s. All you have to do is hand them some money and they let you go!
We were stopped and questioned a number of times but I wasn’t convinced that they would pick up on anything illegal that may be being smuggled out.
I will run through the security:
A security guard (police?) check your passport and ticket before you even enter the airport.
You then go over to the drugs section who are meant to search your bags. (Last time there was a sleepy dog just lying there – he was no longer there – obviously no point if all he did was sleep! There was, however, a cute kitten running around!)
Now the man at this desk asked how many cigarettes and CD’s we had. He then opened one of our bags and just removed some of the top clothes and stuck his hand in the bag. If anything dodgy had been in there he would have missed it. He then asked for another bag to be opened. As hubby was trying to open the lock he   pretty much said to save time and not open the bags we can just pay him.
We then got sent over to a table where another man asks us how many cigarettes and CD’s and DVD’s we had. He said we had too many of them as we are only allowed 4/5 DVD’s or CD’s. Although we said to him the stuff is in the bigger suitcase he decides to check another bag. So hubby slips him some money because that is what he was after, but he said it’s not enough and wanted more.
At this point I must have had a ridiculous expression on my face as my husband gave me a subtle look which pretty much translated to ‘Keep your mouth shut!’
As we were then going over to the scanning machines another guy asked about the cigarettes and DVD’s. Ummm why??? We have already been asked twice! Now if this guy had asked for money I think I would have had a hard job keeping my mouth shut.
During the scanning it was picked up that there were some pills in one of the bags. The guy scanning asked me if it was medication and I said yes. He did not question me further so I offered to show him the prescription but he wasn’t too fussed about it.
We then go over to the check in desk. We first have to show our passport and tickets to a gentleman standing there. He signs a photocopy of our passports which we have to give to the person at check in who again checks our passports anyway, so not entirely sure why the first gentlemen has to look at them.
Once the bags have been sent off to the plane the passports are checked at another desk and stamped. The hand luggage is then scanned again and we are searched. Although I say searched, it was just a quick touch (hardly felt her hands) and then that was it. We were free to go to the boarding lounge.
I personally found the whole process a bit confusing, and to be frank, corrupt.
Well, as hubby says, if it wasn’t for the fact that they accept money, I would never be able to bring home so many DVD’s and CD’s!