I have been planning to go to the Hajj Exhibition since it opened. But circumstances beyond my control prevented me from attending until now.

I managed to convince hubby to take a day off work today and off we went.

Please forgive the lack of pictures but sadly you are not allowed to take pictures in the actual exhibition. Although some people were clearly ignoring the rules, I preferred to respect the museums wishes. I managed to take some around the museum itself, but had to use the iPhone, as in the rush to leave in the morning, I forgot to take my actual camera! So sorry about the quality! 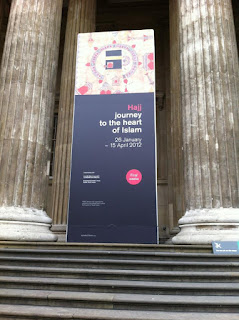 You simply cannot miss the fact that the museum are holding a hajj exhibition. The banner above was right at the front of the entrance.
It is pretty much the same throughout the museum: 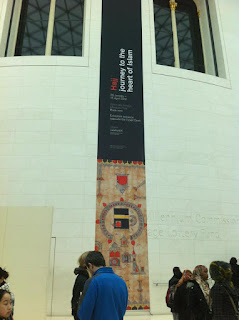 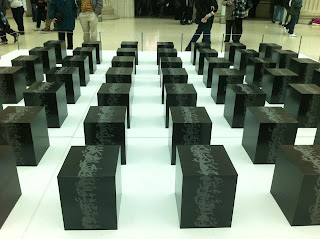 You have to pay for the exhibition itself and it costs Â£12 an adult. You can only enter at set times. We arrived just before 12 and the next available time to enter was 12.50pm. So we had a quick wander around other sections of the museum and went shopping; I found some lovely keyrings: 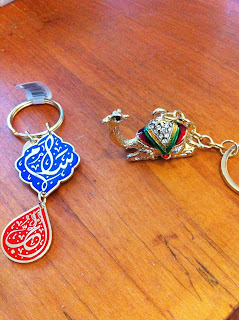 Before you enter be prepared for your handbags to be searched. However, it is more like a quick glance.
You then enter the darkened exhibition to the sounds of the Azaan (call to prayer) mashAllah. This really added to the atmosphere and prepared you for the rest of the exhibition. Munchkin started whispering and asking if we were allowed to talk!
Before the full main exhibition starts, there is a full length door covering of the Kaaba on display. Oh how I wish I could have taken a picture of it. It was absolutely beautiful and one of my favourite items on display.
The exhibition itself is in stages. You are first introduced to the hajj, the reasons for hajj and also a bit about the pilgrims – the clothes they have to wear etc. You are also shown how pilgrims used to struggle to get to the hajj – it is awe inspiring the efforts that they had to go through to go.You are then show various items, including a video, about Mecca and the hajj. And finally you are shown information about pilgrims returning.
I was quite impressed by the video. It is extracts from ‘Journey to Mecca’ which sums up the hajj in a clear concise way. It wasn’t too long and kept everyone’s interest. I had a quick glance around and everyone was engrossed in the video, even the young children.
One of my other favourite items was a covering of the Prophet’s (SAW) grave. I was surprised to see that and it is one of the items I spent longer looking at and taking it in. Again I wish I could show you.
There were a few items there that I wasn’t expecting. I saw what is reported to be Tipu Sultan’s headgear  for war, which was said to be dipped in Zamzan water leading to it being impenetrable.
I was amazed at the amount of non-muslims that were at the exhibition. I guess I was thinking that non-muslims would not be bothered, considering the hatred that seems to be out there for Muslims at the moment. However I was so pleased to see that they genuinely seemed interested and wanted to learn about the beauty of Islam and the hajj. I heard one lady at the start of the exhibition ask a Muslim man if women were allowed to attend and be near the Kaaba. That did make me smile as there does appear to a common misconception that the women are not allowed to do anything and have to just stay at home, but I was glad she was asking and wanted to learn.
The exhibition is only running until the 15th of April. So if you are planning to attend then don’t delay! If you would like further information about the hajj you can see my post here.
Disclaimer: I was sent a complimentary ticket to attend the exhibition. However, I was not asked to write this review and all opinions are my own.